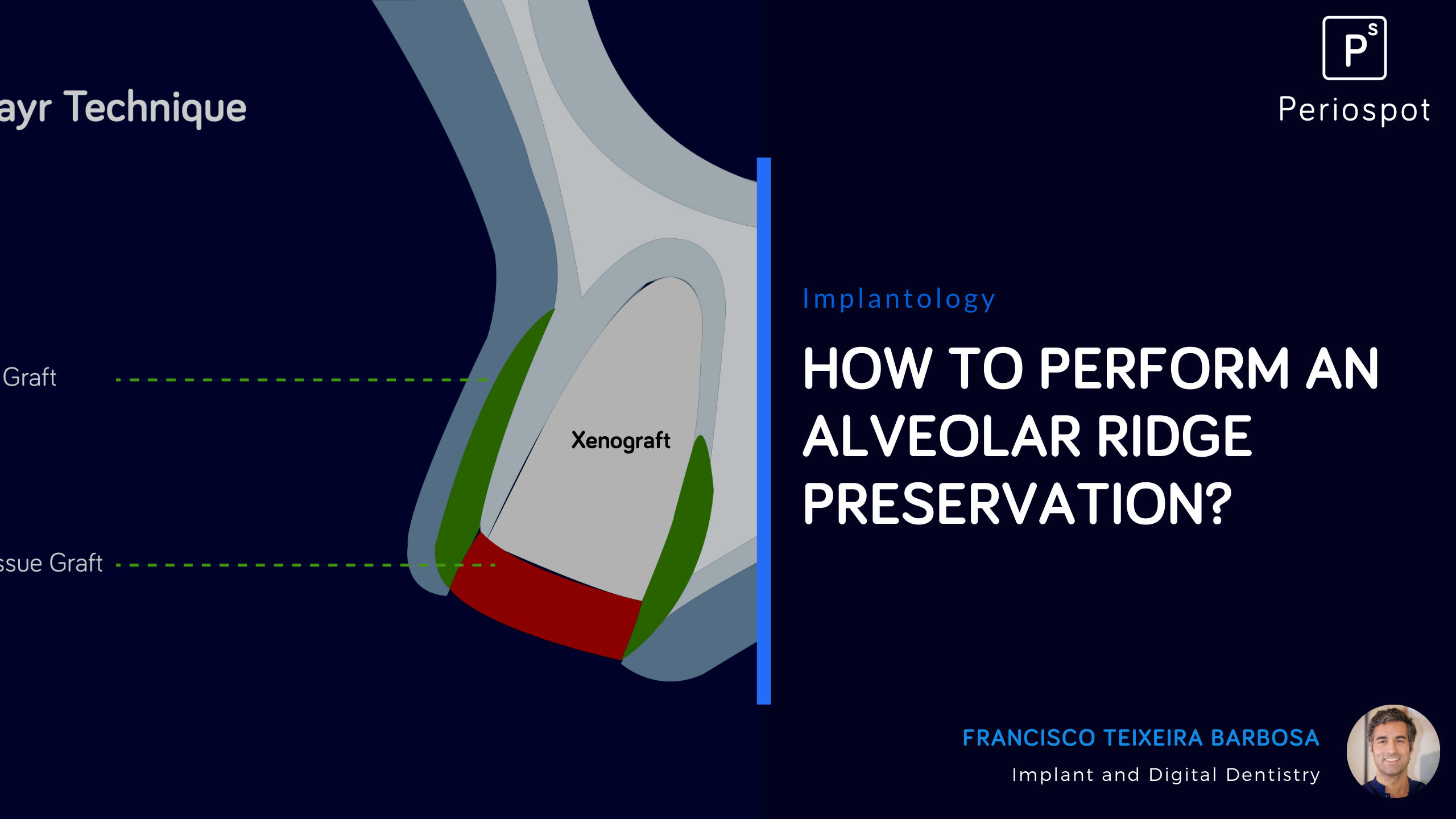 How to perform an Alveolar Ridge Preservation?

I recently read a story about an American comedian who was performing a gig in New York City.

He walked onto the stage in a good mood and started to show his best material and tell his best jokes, thereby producing his best performance.

But nobody was laughing.

He kept on trying, but there was no result. Nothing.

He walked off the stage and thought about quitting being a comedian.

Then he discovered that the audience was an Italian tour group, and no-one understood a word of English.

Was he a bad comedian after all?

Should he try the same jokes in another gig, and this time with English-speaking people?

For sure, he should.

This reminds me that sometimes, when a given technique is performed by using specific materials on a given patient, the outcome does not turn out as expected, because the technique, or the background, was not indicated.

And this applies especially to ridge preservation.

Discussing the preservation of the alveolar ridge is like discussing marketing. Everyone has his own opinion about it, and very often they have no scientific background to support what they say.

Therefore, if we try to explain in two sentences what alveolar ridge preservation is, we will very likely found ourselves stuck in the middle of it, or guessing, and wondering if what we just said is in any way supported by scientific publications.

I should perform an alveolar ridge if

And use this special technique if

This article is focused on trying to fill these two sentences and explaining the basic techniques to perform alveolar ridge preservation.

It was already described here on Periospot what happens after extraction and also the timing to place an implant after socket preservation.

We are going through some of these techniques, and I´m also going to provide an extra technique that was a game changer for me and is my secret weapon.

First of all, it’s mandatory to mention that an immediate implant is also an option, although some publications consider it a technique to avoid if we seek an aesthetic result (Tonetti 2017).

Although the abovementioned article is a randomized controlled trial, we should read it with caution. I explain more about this publication in this article in case you want to learn more about why the author states that immediate implants are not recommended when aesthetics are at stake.

Also, to get some tips about immediate implants, don’t miss this article where I cover some guidelines on this procedure.

But let’s go back to alveolar ridge preservation.

This is indicated if we are thinking of placing the implant in the next two months after extraction.

The main reasons to perform this approach is a lack of soft tissue due to recession.

In these cases, biomaterials are not used as they would delay bone formation.

This technique is indicated when the buccal bone defect is less than 50% and when the implant is planned to be placed after 4–6 months.

Using a bone substitute and a soft tissue graft has been proved to be a reliable approach to prevent vertical and horizontal changes after extraction (Jung 2004).

Two techniques that can be used in these situations are the following:

This technique was proposed by Elian in cases where the gingival marginal is preserved but there is a buccal bone defect (Elian 2007).

It is always important to check the integrity of the buccal bone as in some cases there is no soft tissue recession, but a buccal bone defect is present, and if an immediate implant is performed in this condition it may lead to dramatic aesthetic failure.

This video explains the technique using a collagen membrane acting as a “fake” bone wall to allow the placement of the xenograft.

Also, it can be sealed with an autogenous soft tissue graft or a collagen matrix as it is shown in the case below (Jung 2013). Sealing the socket will prevent the leakage and contamination of the biomaterial.

This technique consists of a combination of an epithelized-subepithelial connective tissue graft.

It was described as a socket-seal technique combined with implant, but I´m going to describe it as a approach for an alveolar ridge preservation.

In my opinion, this technique is superior to any other technique as it has two main advantages:

The result is having a graft that will contract the unavoidable shrinkage of the alveolar ridge after an extraction.

The animations below show the procedure of placing the combined epithelized-subepithelial connective tissue graft in a fresh extraction socket, but it mainly consists in preparing two receptor chambers, one buccally and the other palatally, both of them with partial thickness.

This animation shows how the combined subepithelial and epithelial graft is placed in the socket.

After 4–6 months, the condition of the alveolar ridge will allow proper placement of the implant and also a nice amount of soft tissue, which, in some cases, prevents the necessity of performing a second connective tissue graft.

The main drawback of this technique is that harvesting an epithelized-subepithelial connective tissue graft from the palate is not so easy from a technical point of view, and also, the wound of the donor site can be very uncomfortable for the patient due to the extent of the graft.

I was once listening to a wonderful lecture about immediate implants from Albert Barroso. (I have to say it was the best lecture about this topic that I’ve ever heard in my life.) During the lecture, Albert said:

“The other day, one of my students tried to perform socket preservation in an Elian Type III Socket. This is only effective if one wants the biomaterials company to achieve their sales target”.

And he was absolutely right. Trying to perform ridge preservation in a Type III socket is like trying to convince flat-earthers that planet earth is round.

Therefore, when a buccal bone defect is more than 50%, performing flapless ridge preservation is useless.

In such cases, the most effective approach is to perform guided bone regeneration, using a xenograft and a collagen membrane, and finally, a coronal advancement flap to cover the bone regeneration.

In this situation, placing the graft, and not covering it with a coronal advancement flap, has very weak evidence (Vignoletti 2012).

Likewise, our comedian friend who was well-equipped with good jokes, and a doctor who uses the best biomaterials and has the greatest surgical skills, is not a guarantee that alveolar ridge preservation is going to be successful.

As we summarize in this article, a decision tree is important for selecting the correct approach in the different cases, where immediate implant placement is not indicated.

Is important to make some takeaway remarks regarding alveolar ridge preservation:

– Performing ridge preservation will provide more optimal conditions for ideal implant placement, than if the socket is left to heal spontaneously.

– After alveolar ridge preservation, the implant surgery can be performed after four months. We already reviewed the literature, and in this infographic, you can find that after four months, there are already conditions for implant installment (de Rissi 2014).

– Consider the two months of osseointegration as a part of the process for of the graft in the alveolar ridge preservation.

– Covering the biomaterial with an autogenous soft tissue or a soft tissue substitute will provide a superior outcome (Jung 2013).

– Alveolar ridge preservation will not avoid the resorption of the bundle bone. We have to keep in mind that the tinner buccal bone wall will always be resorbed until it has at least 1,8 mm thickness (Spray 2000).

Today, if I had to pick a favorite technique, no doubt, I would choose the Stimmelmayer approach.

I hope you find this article useful and, as always, I would love to hear your feedback and questions about this topic. 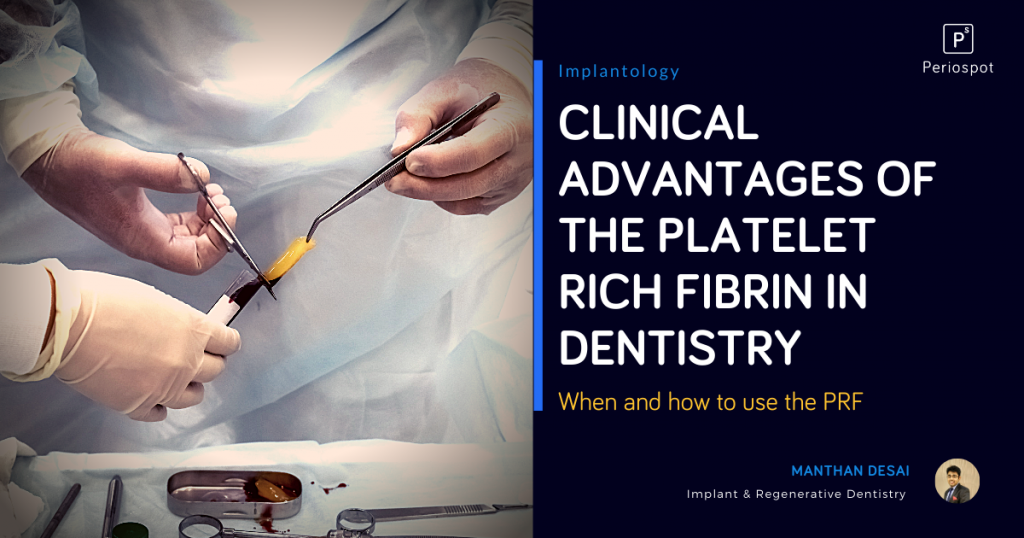 Clinical Advantages of the Platelet Rich Fibrin in Dentistry

It is often rightly said “Nature is the Best Teacher”. The best treatment modalities in…
Menu Scroll Up