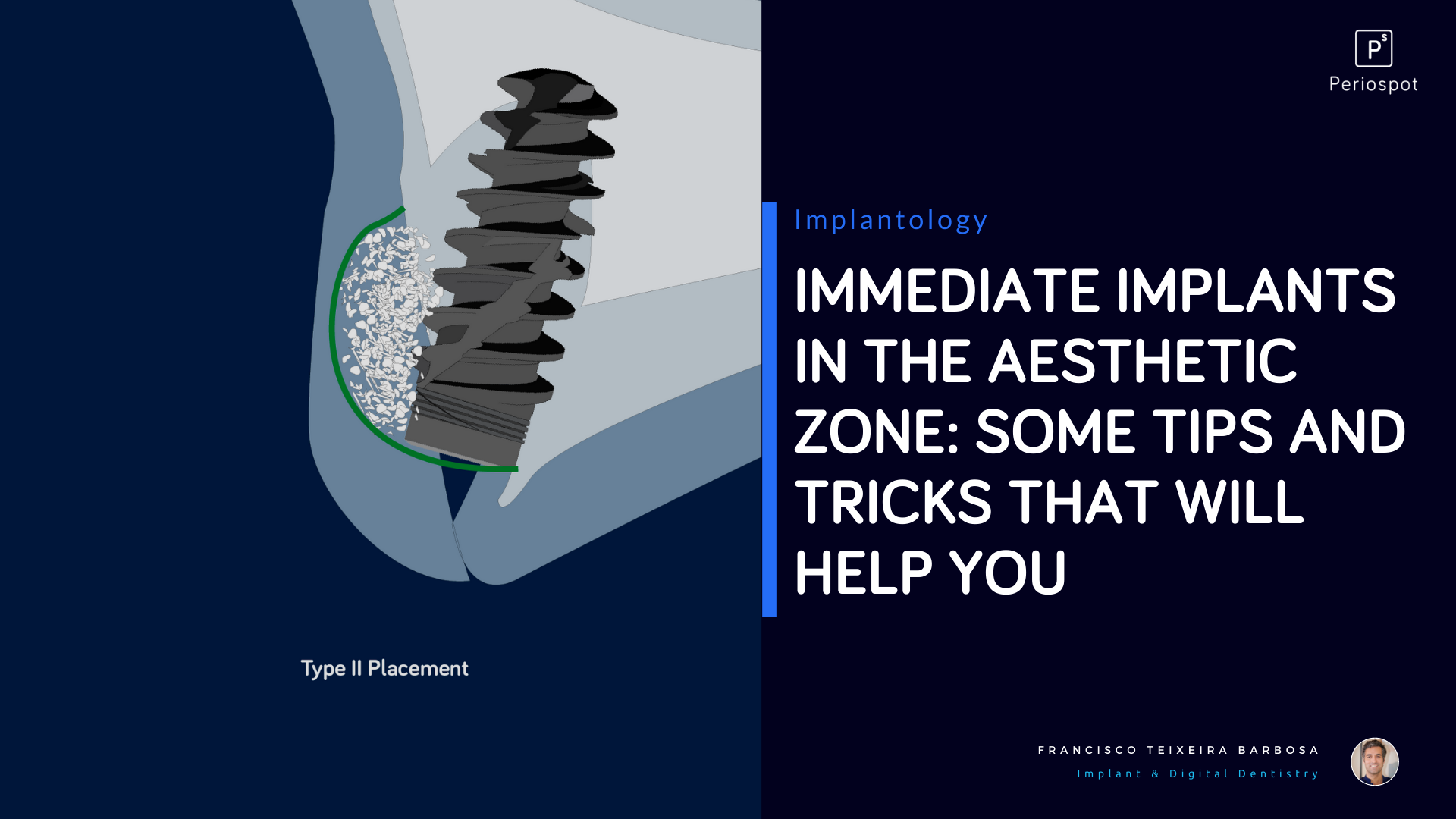 Immediate Implants in the Aesthetic zone: Some tips and tricks that will help you

When I’m in the middle of a discussion about the topic of immediate implants, I always remember of Schulte.

Schulte was the first describing the placement of the immediate implants, as a different therapeutic approach (Schulte 1976).

But I can imagine how much he was criticized at the moment when the only accepted approach was the Branemark protocol.

If you are a supporter of the 3-6 months loading protocol, maybe you should consider stopping reading this article right now.

Also, I can imagine, all the scientific community at the time, mocking around the Schulte approach, like this guy from Microsoft:

Also, I wanted to do a small experiment with dentists, and I did a poll on Twitter:

And guess what? It seems we do like the immediate implants approach…

But let´s start with the serious stuff now.

Does it work? Is it a reliable option? When can we perform it? Well, questions about this topic are finite, but they may be a lot of them to solve in just a blog post.

So let´s try to brainstorm around it.

Diagnosis: Case selection is the key to success.

To have an accurate assessment of a case you should try the ERA Tool- Esthetic Risk Assessment Tool (Cordaro 2009).

I created my own Excel, where I can have an idea if the case that I have in front of me is a complex, straightforward or advanced. It looks like this:

Then I count how many red, green or yellow boxes I have.

It essential to see how many red boxes outweigh the green which makes this case not suitable for an immediate case for greater predictability, it’s far more important to have more green boxes.

1) The lip line. This will determine if any mistake you may commit will be visible

2) The soft tissue biotype: I´ll write about this later, but to have an idea, recession is more likely to happen in a thin biotype (Kan 2011)

3) The patient expectation. Make sure that the outcome that the patient seeks, is possible, from a  biological and functional point of view.

Also be aware of the patient´s girlfriend, mother or any other relative expectations. I once had an unscheduled quarrel with a patient relative, and it was not a pleasant experience.

We have to check always the integrity of our socket.

“The presence of interproximal bone is mandatory if you  want to get some papilla around the restoration (Kan 2003).”

The presence of the buccal bone will determine if you should perform a more conservative approach. The Elian classification is useful in this case (Elian 2007):

Type I socket is favorable for an immediate implants placement, while type II and Type III will need an augmentation procedure.

If we use a CT scan (which is strongly recommended), we can check the sagittal root position in relation to the anterior maxillary osseous housing.

Watch this video to learn the classification:

This is a controversial point, so I´m going to try to be polite.

Primary stability has been suggested to be an essential prognostic for osseointegration (Brunski 1988).

There are also publications where implants without primary stability, could be osseointegrated when they were left undisturbed during the healing process (Ivanoff  1996, Rodrigo 2010).

“It is, in fact, important to achieve an optimal primary stability if we are going to perform an immediate restoration.”

But, did you know that even torque of 10 N·Cm would be enough, as long as the provisional is bonded to the adjacent teeth? (Norton 2011)

I cannot recommend you to load an implant that was placed with a torque of 10 N·Cm.

So, what’s the best implant geometry for an immediate implant?

It seems that conical implant achieves a more optimal primary stability in a fresh extraction socket (Kan 2014). Although we have to know that the spontaneous filling of the gap, is significantly better in cylindrical implants than in conical (Tomasi 2010).

If we read some articles about immediate implants, we may notice that some authors used to choose implants with a diameter up to 5 mm (Kan 2001).

It has been showed that this can bring negative consequences for the stability of the peri-implant soft and hard tissues (kan 2011).

3D implant position is crucial to achieving an aesthetic outcome.

I´m not going to explain here the basic rules about the ideal position of an implant in immediate cases; this has been explained and illustrated in this iBook (Spanish version here).

But I created this video where some new concepts are explained:

We have to avoid our implant to be drifted buccally. For that is important that during the drilling, we should start drilling in the palatal wall, avoiding the root tip.

This will provide an ideal position to restore the implant, an ideal gap between the implant and the buccal wall.

Avoiding the buccal wall also will save us a lot of biological complications.

Remember: Never engage the implant to the buccal wall. Never!

It is well described in the literature, that the utilization of a subepithelial connective tissue graft simultaneous to immediate implants placement, improves the stability of the peri-implant soft tissue (Cornelini 2008, Kan 2009, Chung 2011, Tsuda 2011).

When compared to immediate implants without connective tissue graft, SCTG was shown to be beneficial in maintaining the facial gingival level (Yoshino 2014).

The use of a provisional

I have written about the importance of using temporaries in this free ebook about aesthetic implant dentistry.

They are essential if we seek an aesthetic outcome. In a case of immediate implants, some authors have suggested that the provisional is important to maintain the dentogingival architecture (Yoshino 2014).

At this point, I would like to add that the use of a CAD/CAM PMMA may be the best option, as they have been proved to have an optimal mechanical and biological behavior (Edelhoff 2012).

I´m an advocate of the PMMA CAD/CAM restorations, which I´ve already described as an important part of my workflow when I perform a Digital Socket Shield Technique (iBook here).

Concave emergence profiles seems to have a positive impact.

This feature was already tested by several authors (Rompen 2007, Redemagni 2009). Also, we should consider using a definitive abutment, placed the same day of the surgery, to avoid further disconnections (Abrahamsson 1997).

Let´s see how this concave profile can be applied, illustrated with this short video (Su 2011):

Although this is a controversial topic, I  feel these points can be useful from a clinical point of view:

We could conclude that the use of SCTG is mandatory in case of thin biotypes.

Also, the use of a provisional is a “must-have” in every restoration with a demanding aesthetic outcome.

Of course, we cannot forget that, everything explained before, does not make sense if the implant is not placed in an ideal 3D position.

Trimodal approach (immediate implant, flapless, immediate restoration) is a reliable and predictable procedure (Cabello 2012). In some cases, other techniques and features can be added to this approach:

– Subepithelial connective tissue graft, in a case of a thin biotype.

– Socket shield technique (we have to see if this approach is predictable in the long term).

It can be an individualized approach, by every clinician who incorporates scientifically based knowledge.

Do you agree with immediate implant approach?

Norton, M.R. (2011) The influence of insertion tor- que on the survival of immediately placed and restored single-tooth implants. The International Journal of Oral & Maxillofacial Implants 26: 1333–1343.