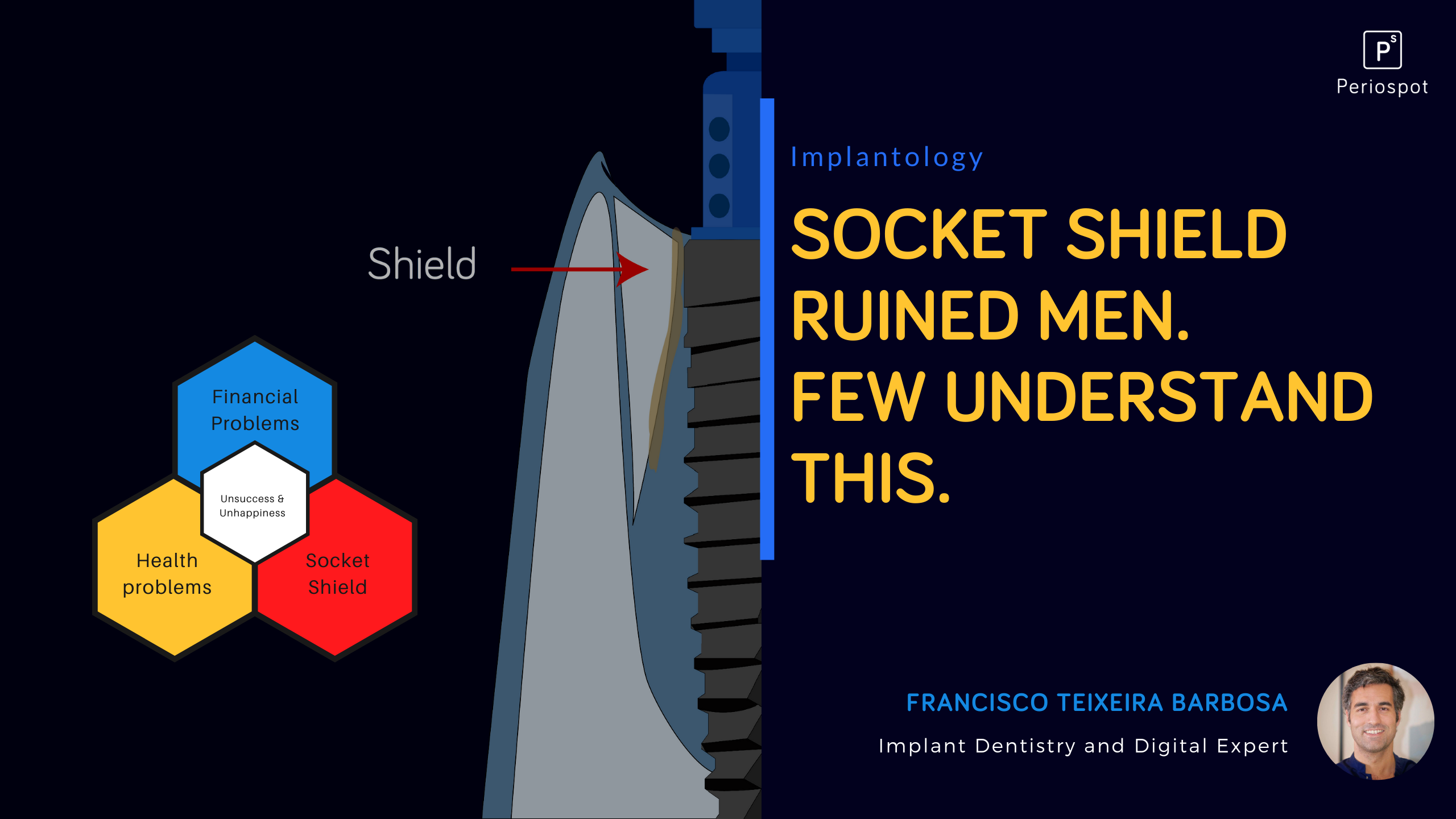 Now I got you reading the article, and you are wondering why I’m dropping such a strong statement without even mention a scientific reference.

We should start remembering that article from Maurice Salama in 2007 introducing the word RST concept.

I remember the day I attended his lecture in Spain, presenting such a disruptive concept, and I recall not having any white hair. Also, not having a clue about implant dentistry. Still don’t, but that’s not the point.

“Is this guy leaving roots below fixed restorations? He’s nuts. Americans should not be allowed to lecture in Europe.”

This was one of the many things that came to my head while listening to such a mind-blowing concept.

But then, after the congress, with a beer in my hand, things started becoming less blurry.

I began to think that “maybe this “crazy American” guy that showed us extraordinary cases and who also can predict the height of the papilla in different clinical situations” was right in some way.

The rationale was clear: If you maintain the tooth or the root, the periodontal ligament is also maintained, and all the events that take place after an extractions do not have to happen (Cardaropoli 2003, Araujo & Lindhe 2005).

If not, you can check this article about immediate implants that deep dive into the topic.

Nevertheless, we have to remember that famous article from Araujo & Lindhe in 2006 that concluded like this:

“Implant placement failed to preserve the hard tissue dimension of the ridge following tooth extraction. The buccal as well as the lingual bone walls were resorbed. At the buccal aspect, this resulted in some marginal loss of osseointegration.”

After reading that article, just a few ventured to continue doing immediate implants or at least to recognize it.

Almost everyone, except a Galician stronghold that in 2008 had enough guts to go against the Status Quo and publish an article showing that at the end, immediate implants are not so bad “if you do it flapless and if you use narrow implants” (Blanco 2008).

The immediate implants topic escalated to a point tearing families apart and even broking ten-year-old marriages between periodontists and implantologists.

Things were already too complicated, and on top of this, someone in France decided to publish an article analyzing the result of placing implants in contact with ankylosed roots (Davarpanah 2009).

I can imagine how the thing happened:

“Oh well, my agenda today sucks. 10 extractions in a row of ankylosed roots. Feeling lazy to waste my energy on this. I’m going to place the implants, and if the root comes out great, if not, I’ll publish this.”

Well, it didn’t go so bad as expected. It was also concluded that “This series of cases suggests that implants placed in contact with ankylosed root fragments might not interfere with implant integration or harm occlusal function, at least in the mid-term”.

Meaning: “If you feel lazy about extracting the ankylosed tooth and placing an immediate implant, we have a solution for you”.

That was great news!

But it was in 2010 when this trend started getting serious with Huerzeler’s publication. It was the first time the technique of leaving a root fragment during an immediate implant procedure was finally named “The Socket Shield Technique”.

It ruined men’s life. And if you don’t believe me look at the following chart that proves a direct correlation between Socket-Shield and the rise of young male virginity.

Today, we have the PET (Partial Extraction Technique) legion on almost every platform. You can join them on Facebook and see the incredible cases from Howie Gluckman, Darcio Fonseca, Jorge Campos, Maurice Salama and other, top clinicians.

Some of them are pretty extreme cases and even difficult to justify from a clinical and scientific perspective. Not to mention the PROMS. This topic deserves another article apart.

Today we already have more scientific data related to the Socket Shield and even some recent systematic review that considers that the technique “can be used in dental implant treatment, but it remains difficult to predict the long-term success of this technique until high-quality evidence becomes available.” (Ogawa 2021).

I started doing Socket Shield cases back in 2012 as soon as I read Hurzeler’s article.

Fortunately, by the time I start reading about the Socket Shield, I already had the opportunity to practice Aggressive Cuddling.

Everything in that article resonated with me, and I started connecting the dots from the various publications available at that moment (Salama 2007, Davarpanah 2009).

In my first cases, I stuck to the original protocol, using Emdogain® (Straumann) and trying to be as precise on the shield preparation as described in the article.

I added some digital workflow, and I started doing all the cases with immediate restorations after digital impressions with Trios 2 (3Shape).

After four months, I repeated the digital impression to record the emergence profile and design the definitive restoration.

You can see one of my first socket shield cases in this video:

Initially, the results were excellent, and we also start using the .stl files resulting from the digital impressions on day 0 (surgery).

After four months (definitive restoration), we could overlap the two .stl files and measure the difference in buccolingual volume, the gingival margin, and the overall peri-implant volume variation.

Comparing the conventional immediate implant technique, we could observe that the gingival margin remained almost similar to the situation before the extraction.

I even had the pleasure to submit the abstract and present it during Europerio 2015 in London.

Complications are the worst part, and just a few talks about this.

I had complications and mainly after performing more than 30 cases.

They were mainly early failures, and there was a pattern in all the failed cases:

The third reason, regarding the Shield preparation, I linked it with the Dunning-Kruger effect.

At some point, you observe that all the cases are being a success and you start not being so picky during the Shield preparation.

Always remember that, like other techniques like guided bone regeneration or soft tissue graft, Socket Shield is a very sensitive technique (Fonseca 2018).

The are things that do not make any sense, like this case shared by Carlos Polis on Stranger Implant Facebook Group.

A virgin guy trying his best to preserve the bundle bone on a third molar.

Socket- shield technique and other PET techniques seem that they are here to stay. They need that high-level evidence that fully supports and endorses the technique for being performed in routine clinical practice (Baumer 2017).

Meanwhile, you can enjoy the cases and the discussions that you can find on the PET group, and if you feel confident enough, start doing your first case and always considering the indications of the technique:

Also, keep in mind that you can start performing Socket Shield cases, and hopefully, it will not interfere with your virginity. (Download Tinder here)

Keep the faith if the big day is yet to come. Meanwhile keep swiping to the right on Tinder.

In this package you will find some content and useful resources related to Socket Shield technique: