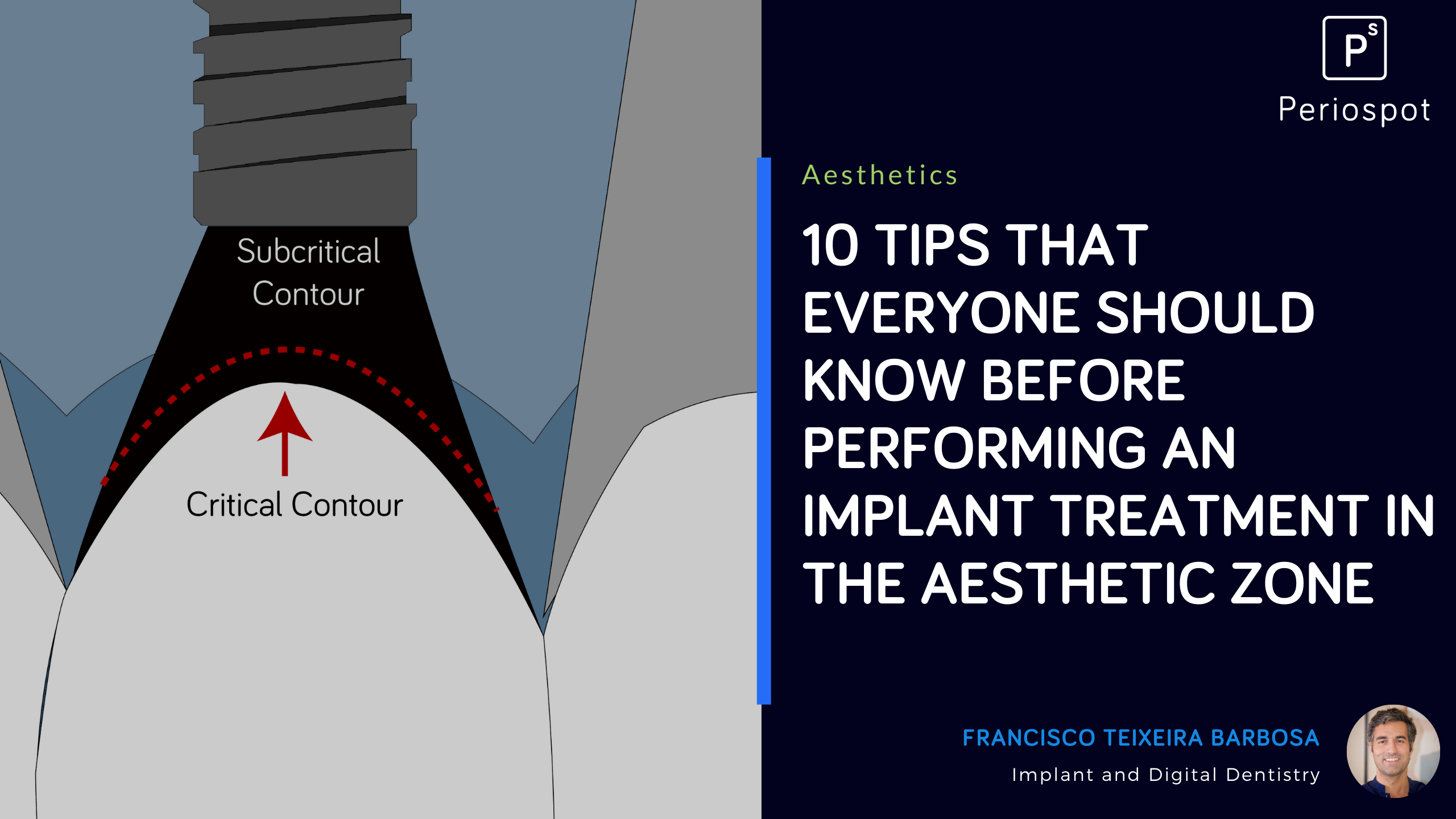 Nowadays, implantology is a predictable area and well-accepted by the scientific community for missing or doubtful prognosis tooth reposition. More than 30 years ago, Brånemark and col. published the first articles that presented implantology as a safe and predictable method to rehabilitate edentulous patients if a standard protocol is performed, in which one of the key factors was the time the implant was submerged until loading (3 months for the jaw and 6 months to the maxilla)(Bränemark 1977).

Years later, Albrektsson establishes success criteria for every treatment involving implants, where implants should be absent of mobility, pain, radiolucency around the implant, and the bone loss should never be more than 1,5 mm and 0,2 mm per year (Albrektsson 1986).

Although this is a prevailing criteria, at that time treatment involving implants were mainly functional and aesthetics were at most at the time, not a mandatory requirement. Smith et al. just three years later established that aesthetic have also an important role for a successful implant treatment (Smith 1989).

For that there are some golden rules that every implantologist should manage in order to achieve predictable results on the aesthetic zone and in this article there will be described ten rules that everyone should consider:

1) The edentulous gap in the anterior zone: When there will be papilla?

2) Placing 2 adjacent implants. What should we expect?

Placing two implants adjacent is always a big challenge. The mean papillary height between to implants will be 3,4 mm, which is in the most of the cases insufficient to achieve an optimal aesthetic result (Tarnow 2003). This issue can be solved by placing one implant to substitute two anterior teeth. This way it is expected to achieve a higher papilla level between an implant and a pontic (5,5mm) (Salama 1998).

It is important to choose the right abutment when an aesthetic restoration is performed. If there is a thin mucosa with less than 2 mm width, zirconia should be the option cause metallic abutments will show a color alteration of the peri-implant soft tissue (Jung 2007,2008).

4) Immediate implants and aesthetic results. What should we know?

Although this is a very discussed topic, there is some basic knowledge about immediate implants in the aesthetic zone. Unavoidable bone resorption happens when a tooth is extracted (Cardaropoli 2003, Schropp 2003, Araujo & Lindhe 2005) and these events are not avoidable if the implant is placed at the time of the extraction (Botticelli 2004, Araujo & Lindhe 2006).

There are some protocols published to over correct this events, like performing a connective tissue graft at the time of the immediate implant (Kan 2000, Kan 2005), but the recession of the gingival margin is likely to occur (Evans 2007).

This facial recession will be more pronounced on a thin biotype rather than a thick biotype (Kan 2011), so there could be stated that immediate implants in a thin biotype is not a predictable treatment and other treatment options should be considered, like ridge preservation (Jung 2012).

The time when the implant is placed has been a topic of discussion(Hämmerle 2004). One option is to perform the extraction and after one month place the implant with simultaneous ridge augmentation (Buser 2013). This method as been proved to be a reliable way to achieve predictable aesthetic results.

6) Provisional restoration. Is it mandatory?

Even if there is no provisional after the surgery, it is important to reshape the soft tissue before placing the definitive prosthesis. The provisional restoration is also a way to achieve the final peri-implant shape and then transfer this emergence profile to the lab (Elian 2007).

Some of these contents are well explained on this ebook about immediate loading.

Fig. 12-13-14: Every demanding aesthetic treatment involving implants should have a provisional phase before the definitive prosthesis is delivered. It is mandatory to design natural emergence profiles before finishing the treatment.

During the provisional phase of the treatment, a correct and natural emergence profile should be created in accordance with the adjacent teeth. In every emergence profile two contours can be differentiated (Su 2010):

– Subcritical contour: Is the contour below the critical contour. When properly managed, this contour can create soft tissue volume (concave) and once this volume is created it can be displaced where is needed.

There are some other ways to manage the provisionals during the healing phase but always regarding the concepts posted before (Wittneben 2013).

8) Implant three-dimensional position. Where to place the implant

Then an implant is placed in the anterior aesthetic zone, there are some rules that should be a guide for every implant placement (Buser 2004):

Medio distally: The implant should be at a distance of 1,5 mm from the adjacent teeth. This is the minimal distance although there are some articles that even showed that 2 mm would be an improvement (Gastaldo 2004).

Buccal-palatal: The buccal part of the implant should be 1-2 mm palatal to the emergence profile of the adjacent teeth.

Fig.16, 17, 18- Placing the implant in the comfort zone is a requisite when implants are placed in the aesthetic zone.

Nowadays there is an increasing implant market in almost all countries with some new implants brands. This is something positive to the clinician but we have to be well aware if the different implants companies can fulfill our expectations and also the treatment and patient goals.

Platform switching is a biological concept well implemented in almost all the implant brands (Lazzara 2006), but we should know that although it is an important issue, platform switching is not the only factor that can contribute to less bone remodeling after implant placement. Lately, Zipprich (Zipprich 2007) proved that the stability between the implant and the abutment is crucial to avoid the “pumping effect” which leads to bone resorption.

Fig.19, 20- Knowing the behavior of the implants that are used in the daily practice will allow the clinician to have an extra confidence with the treatment options offered to the patient.

Several methods have been described to avoid the negative effect of an extraction like immediate implants (Botticelli 2004, Araujo & Lindhe 2006), barrier membranes (Lekovic 1997) although the most suitable technique advocated preserving the volume of the socket is the ridge preservation (Araujo 2009).

Lately, a new technique is being described as an option to perform an immediate implant without the negative consequences of the bone remodeling after an extraction (Hürzeler 2010), and the rationale behind this technique is preserving a tooth fragment that will avoid the resorption that takes place after the extraction.

Although this technique is quite promising we should be aware of the incoming publications about a larger follow-up of this technique and the predictability of leaving a fragment inside the socket after an extraction (Baumer 2013, Kan 2013).

Today we can find in the literature an important number of reliable protocols to achieve satisfactory aesthetic results in our treatments. But we should consider that the success is most likely to happen if a correct diagnose and treatment plan is carried out. There are some important tools that we should use daily in our daily practice in order to assess and help the clinician identifying the complexity of a case before a treatment plan is defined (Buser 2009).

Clinicians also should perform protocols that are well described in the literature and with a follow up that categorize that treatment option as a predictable in long term. Nowadays there is sufficient data and scientific background to establish clear guidelines when demanding aesthetic treatments involving implants are required.

When we dive into the world of periodontal plastic surgery, it is unavoidable to avoid…
Menu Scroll Up