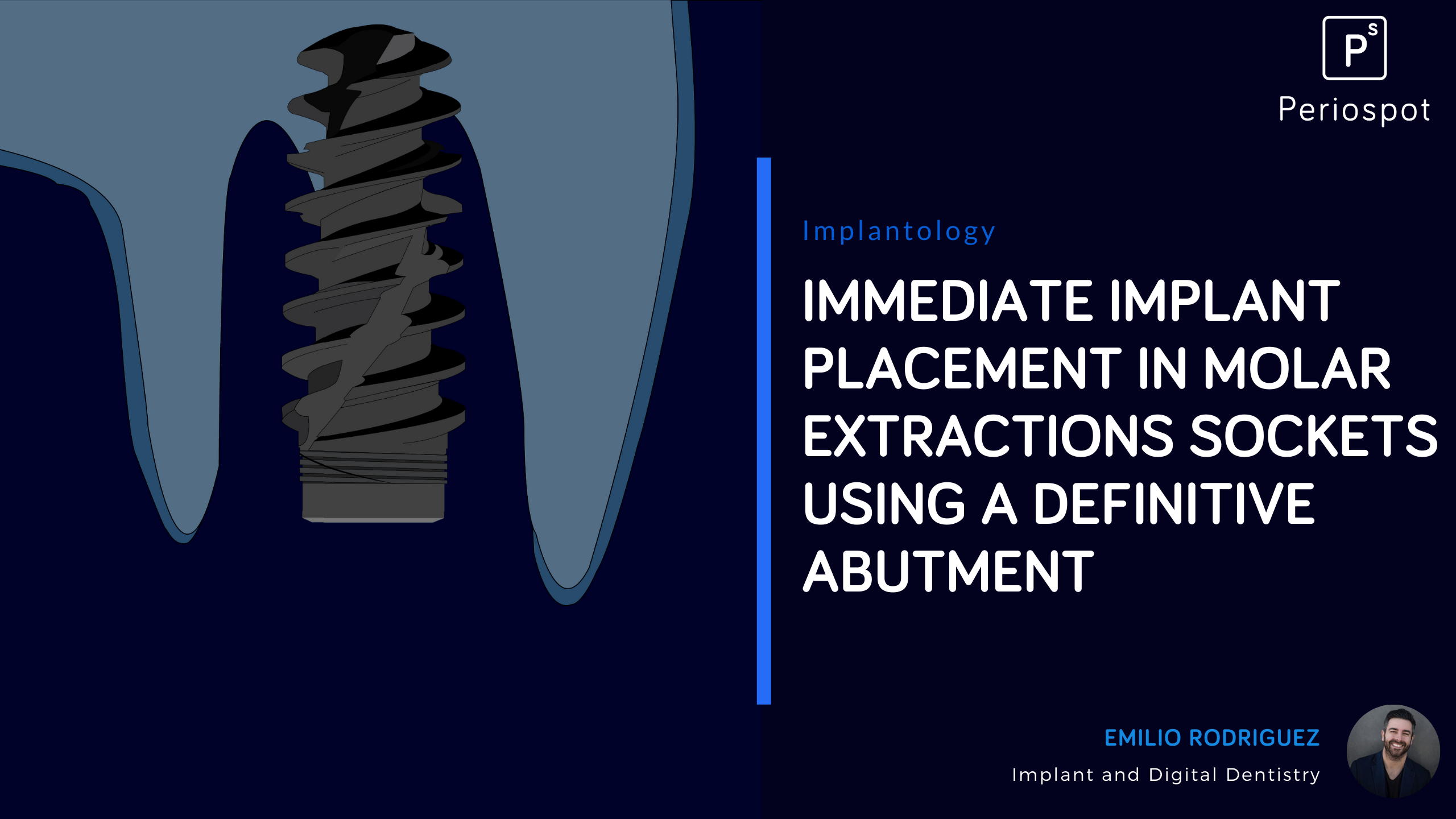 Introduction to Immediate Implant in Molars

Immediate implant placement into a fresh extraction sockets has become a common and well documented clinical procedure, especially in the aesthetic area (Lazzara 1998,Kan 2000). The main advantages of this technique include reduced treatment time, immediate tooth replacement, and preservation of the existing osseous and gingival architecture (Kan 2000, Garber 2001).

However, an immediate implant for a molar replacement continues to be controversial and less known. To ensure successful implantation, in addition to the primary stability, the absence of active infection, integrity or not of the bony walls must be considered (Kan 2000, Kan 2011) The classification proposed by Smith et al. (Smith 2013) for molar extraction sites could help to take a rational decision (this was already discussed in other post here):

Type A socket, which allows for the implant to be placed completely within the septal bone, leaving no gaps between the implant and the socket walls.

Type B socket, which has enough septal bone to stabilize but not completely surround the implant, leaving gaps between one or more surfaces of the implant and the socket walls.

Type C socket, which has little to no septal bone, thus requiring that the implant engage the periphery of the socket.

The purpose of these cases clinic report was to evaluate the soft-tissue changes and the marginal bone level following the immediate implant placement in molar extractions sockets using a definitive abutments and followed for 12 months.

More about Smiths classification in this video:

The study subjects were selected among partially edentulous patients who attended to a private dental office (Madrid, Spain) for implant treatment. Inclusion criteria were as follows: 1) molar extraction; 2) patient age 18 years or more; 3) immediate implant; 4) no medical contraindication for implant surgery; and 5) signed informed consent for participation and permission to use obtained data for research purposes.

Patients exclusion criteria if they did not meet requirements listed above and also had the following:

4) alveolar sockets with bone defects at implantation sites; or

5) inadequate primary stability of implant, including the definitive abutment connection at the time of surgery.

The sample included four patients (3 female and one male), who received four implants with platform switching and the definitive abutments at the same time. The mean age of the patients was 43 years (range, 23 to 54 years).

All patients were taken Antimicrobial prophylaxis 24 hours before surgery. It was Amoxicillin 750 mg daily every eight hours for ten days. Local anesthesia was induced by infiltration with articaine/epinephrine, and post-surgical analgesic treatment was performed using 575 mg of metamizol magnesium four times a day for five days.

After the atraumatic extraction of the molars, the sockets were prepared following the implant system milling sequence, and four implants were inserted so that the implants shoulder was placed slightly to the septum and at least 2 mm beneath the bone crest. Implants of 3.5 or 4.3 mm diameter and 8 or 11,5 mm long were used (Alvim CM, Neodent).

Fig. 1- Immediate Implant after extraction of a lower jaw first molar 46 (Neodent® Alvim), and placement of the definitive abutment (32 N.Cm).

Post-surgical instructions were provided, including a soft diet for one week. During the healing period (12 weeks), two definitive abutments were removed because were too high so they were replaced by shorter ones. After that, the abutments were never removed, and the impressions were taken with standard or custom open-trays and addition silicones.

During the observation period (12 months), the four implants were osseointegrated, and functionals, mechanical or biological complications were not reported. The volume of the soft-tissues and the horizontal ridge were lower than the initial situation. However, the radiographic controls showed bone over the implant platform.

Fig. 2- Healing after 2 months, the definitive restoration was delivered.

Implants placed into fresh extraction sockets have a high rate of survival and minimize the impact of the bone remodeling after tooth or molar extraction (Schwartz-Arad 1997, Clementini 2015). Anatomically, sockets type A or B are the most favorable to immediate implants in order to achieve primary stability (Schwartz-Arad 1997).

In our study, we did not find sockets type C, but according to the references consulted, we will have to select wide diameter implants to engage the buccal and lingual walls which if it is not performed correctly, the risk of bone resorption will increase significantly. This was also suggested in this article.

From a biological perspective, it was thought that the immediate implant was able to stop the bone remodeling and maintain the volume and shape of the surrounding tissues. However, this technique is not able to preserve the coronal portion of the buccal plate. Araujo et al. in 2005, showed in their experimental study in animals, that after dental extraction, the periodontal blood vessels in thin bone tables are damaged, this being the probable cause of the consequent bone resorption (Araujo 2005).

In 2010, Hürzeler et al. proposed an alternative to the immediate implants in the anterior maxilla, the “socket shield”. This technique involves the maintenance or partial preservation of the vestibular dental root with the purpose of avoiding subsequent tissue alterations (Hürzeler 2010). This technique is just recommended to the aesthetic area and authors as Langer et al. suggests caution, since the intentional or involuntary presence of a dental tooth is a potential niche for pathogens and therefore, can produce osteolysis of the bone surrounding the implant and compromise the osseointegration (Langer 2015).

Fugazzotto is maybe one of the most worlds experimented professionals about immediate implants in molar extractions. He recommended that implants may be placed in ideal restorative positions at the time of molar extraction with or without concomitant regenerative therapy (Fugazzotto 2008). In our case, the four implants were fixed into the septum, which is the ideal position for a transmission of the occlusal forces on the axial axis of the implant.

Two socket gaps were filled with bone grafting material to maintain the hard tissue contour. Some authors as Degidi et all used (Bio-oss®, Geistlich Pharma) to fill the gap with excellent results (Degidi 2015). Nowadays, there is no evidence in the literature consulted about which is the best grafting material (Schwartz-Arad 1007, Clementini 2015, Araujo 2005, Fugazzotto 2008, Degidi 2013). Furthermore, the currently available evidence does not allow for any conclusive statements regarding the efficacy of a concomitant regenerative technique in preventing the amount of alveolar reduction /Clementini 2015, Araujo 2005).

Fig.3- Immediate implant (Alvim, Neodent®) with the definitive Micro-abutment placed the same day of the surgery.

The CM connection has a virtual absence of microgap and, therefore, of micro-movements (Weng 2011). It allows bone overgrowth beyond the implant platform (Degidi 2008, Weng 2011).

Linkevicius et al., suggested that dimensional bone changes occurred during biologic width formation, considering the soft-tissue thickness as a key parameter and not just the platform switching (Linkevicius 2010). Degidi et al. introduced the definitive abutment at the same time of the implantation (Degidi 2013). We screwed to the implant the definitive abutment to help to preserve the initial biologic the same day of the implant surgery with favorable results.

Following the protocols reported and the implants described in the literature, achieve good results could be possible in the molar extractions with long-term success.

Fig. 4- Follow up after 12 months. Peri-implant soft and hard tissue were well preserved.

Immediate implant placement into a fresh molar extraction socket is possible with excellent results with the appropriate implant, with or without grafting materials. The introduction of the definitive abutment at the same time is possible with primary stability, and it simplifies the restorative procedure, minimize the biological changes during the healing period.