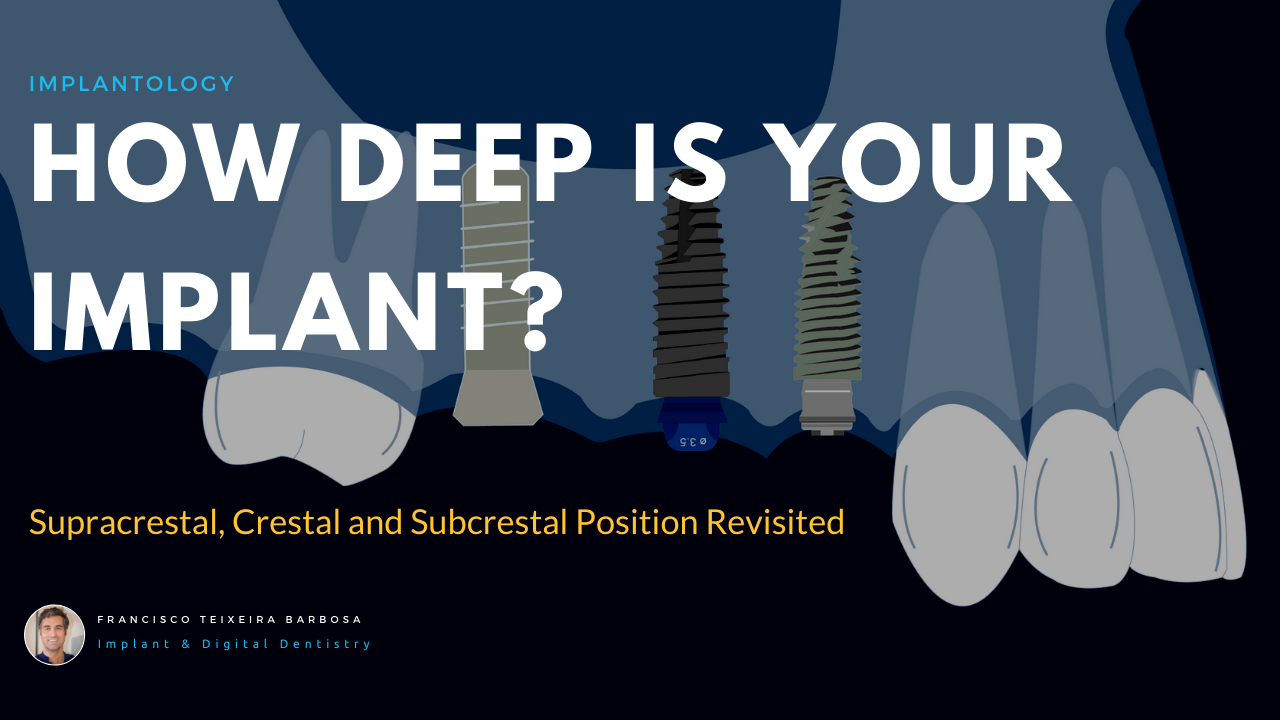 How Deep Is Your Implant? Supracrestal, Crestal, and Subcrestal Implant Position Revisited.

In the 19th century, an Italian economist named Vilfredo Pareto found an exciting discovery while he was farming in his small garden.

He noticed that a small number of pea pods in his garden were responsible for the production of the majority of the peas.

Soon, Pareto analyzed other areas of life, and he noticed the same pattern:

Pareto continued researching, and he found that this pattern is present in many other things in life.

Like productivity. 20% of the tasks we put efforts in, returns us 20% of the results.

Only 20 percent of patients who were treated with implants do not present mucositis, and about 20 percent of the patients have at least one implant with peri-implantitis (Lindhe, 2008; Lee, 2017).

Well, it seems as if only 20 percent of the total length of the implant supports almost all of the stress that has resulted from the loading forces (Himmlová, 2004).

And only 20 percent of the dentists do not recommend Colgate.

We will come later to one of the points mentioned above to discuss further how deep should we place an implant, but before that, let’s make a review of the different implant positions.

The most popular and scientifically supported implant system at the moment that shows superior clinical behaviour in the long term is the tissue level implant (Straumann®, Switzerland) and it also happens to be an implant with a supracrestal position (Derks, 2014; Seungmin, 2018).

In this infographic it is explained the expected outcome of this implant system in the long-term compared to other brands.

The advantages of this implant system come from placing the gap between the implant and prosthetic component and away from the crestal bone.

This vertical displacement of the gap away from the crestal bone is a guarantee that all the bacteria in the gap that cause an inflammatory reaction will not affect the bone (Ericcson, 1995; Hermann, 2001; Hermann, 2003).

Although it has to be mentioned that no clinical studies revealed a significant influence of any particular design on crestal bone preservation (Abrahamsson & Berglundh, 2009; Lang & Jepsen, 2009), more recent publications may have proved that implants with a supracrestal philosophy may have more favorable outcomes in the long term from the point of view of marginal bone preservation and a lower incidence of peri-implantitis (Derks, 2014; Seungmin, 2018).

It was accepted a marginal bone loss up to 1.5 mm (Albrektsson 1986), and it was considered an unavoidable phenomenon paired with the establishment of biological width (Berglundh, 1991; Ericsson, 1995).

These findings were mainly from the types of connections in the fixtures used at the time, as they were mostly external connections placed in equicrestal positions.

It is also important to remark that there is also a direct impact on marginal bone loss and the thickness of the soft tissue (Abrahamsson, 1996; Linkevicius, 2009).

This is what happens when an implant is placed in a thick biotype:

And this is what happens when a thin biotype is present:

Another article here in Periospot has already described platform switching.

Placing an implant in a subcrestal position may have a positive impact from a clinical point of view, mainly in cases in the aesthetic area where obtaining a harmonious emergence profile is mandatory (Novaes, 2009).

It was also proven that the more subcrestally an implant is placed, the less marginal bone loss will occur (Degidi, 2011; de Castro, 2014).

Also, placing the implant in a more subcrestal position will help avoid the exposure of the metallic part of the implant that could be spotted in case thin soft tissue is present (Jung, 2007).

Another advantage of placing the implant in a subcrestal position is that it can help in case of a reduced vertical dimension.

But, from a biomechanical point of view, what could be the advantage of placing the implant in a subcrestal position?

It seems that cortical bone is responsible for the distribution and transmission of occlusal forces, although the publications that support this statement are from 1993 and the density of the bone used maybe was not that accurate, as it was calculated from CT of a dried maxilla (Clelland 1993); it makes sense, as marginal bone loss can be observed when there is an overload of the implant.

These overloading compressive forces should be below 100-130 Mpa to avoid bone resorption around the neck of the implant (Natali 2003).

These findings could also be observed in clinical research, where implants placed subcrestally had a much higher survival rate and even a coronal bone ingrowth around the implant-abutment interface (Lee 2010).

Also, the other force that will be present during occlusal movements will be the tensile forces. These tensile forces may be responsible for the expression of BMP-2 and BMP-4,  which stimulate ossification, but these forces should never overload the implant, which would cause the contrary effect (Sato, 1999).

Summarizing the last three paragraphs, we could say that implants that are placed subcrestally and are entirely embedded in trabecular bone produce the lowest stress and strain compared to those places in an epicrestal position (Sotto-Maior, 2014).

But does this mean that all of the implants should be placed subcrestally?

Far from that, some implants are prepared to be positioned in a subcrestal position.

It depends on the type of connection that the implant has. It would not make sense to place an implant with an external connection in a subcrestal position.

Some two-part implants have been reported to have a very negative impact on marginal bone loss (+/- 2 mm) when the gap size between the fixture and the abutment is about 50 µm (Hermann, 2001a; Hermann, 2001b).

This means that the possibility of placing the implants in a subcrestal position will be determined by the type of connection of the implant where the bacterial infiltrate is minimized by the connection (Berglundh, 2005).

Another critical point is the type of surface of the abutment that is connected to the implant. This given surface with specific characteristics may also be osseointegrated when connected to an implant placed subcrestally (Welander, 2009).

From a biological point of view, this can be an asset, as this connection between the abutment and the marginal bone may provide extra protection against attempts from some pathogens to colonize the implant surface that would lead to peri-implantitis.

Imagine placing the implant below in a subcrestal position with all the micromotion that it has between the abutment and the implant. It would promote marginal bone loss by pumping residual waste from the connection toward the biological width (Zipprich 2007).

The video above is from Dr. Zipprich research. You can check his webpage to watch the micromotion of the different connections.

It is important to remember that the Morse-type connection is the most favorable to be placed subcrestally. Additionally, the implant should have a horizontal mismatch between the abutment and the shoulder of the implant.

This feature, called platform switching, allocates the gap between the implant and the abutment far away from the bone crest. If chronic irritants infiltrate this gap, the inflammatory tissue will be displaced horizontally toward the connection and inside a “safety zone” that is created by the platform-switching concept (Canullo, 2010).

Nevertheless, it is vital to mention that other factors may contribute to bone remodeling around the fixture:

If implant biology also follows the Pareto principle and only 20% of the implant supports the occlusal load, it is logical to assume that this part of the implant should be placed where the bone has a better response to loading.

As osteocytes play an important role in this positive response, the cancellous bone has a higher number of these cells compared with the cortical bone, and we may hypothesize that cancellous bone has better biomechanical properties when it comes to stabilizing mechanical stimuli and external injuries (Anibali 2012).

Also, if we decided to go for a submerged philosophy instead of an epicrestal or supracrestal placement, is essential that not all implant systems be placed subcrestally, and, in this case, implants with a Morse cone connection are the most suitable system for the subcrestal position (Degidi, 2011; de Castro, 2014).

Last but not least, we must mention the “one abutment, one time” philosophy for the subcrestal position. Placing the transepithelial abutment on the same day of the surgery is essential to avoid a second stage where if a cover screw is placed, further surgical trauma has to be done to uncover the implant.

Furthermore, the disconnection of the healing abutment, provisional abutment, and other abutments directly into the connection may cause an apical migration of the crestal bone and soft tissue recession (Abrahamsson, 1997).

Also, implants with a low ISQ (<60) should be approached with a two-stage philosophy to avoid any micro-motions in the implant during the healing period (Szmukler-Moncler, 1998). This pseudo-loading could jeopardize the osseointegration process of the implant (Touati, 2001).

In the video below you can check the protocol for a subcrestal implant placement (Neodent GM Implant, Straumann Group).

To finish this article, let us quickly mention the Bee-Gees song, “How Deep Is Your Love,” where it seems like the deeper the love, the better. Maybe we could apply this principle to implants too: “The deeper placement,” the better, but always with caution and knowing which implant system we are handling.

An implant system is like a boyfriend: if you do not know him very well, he may cause you lots of problems.