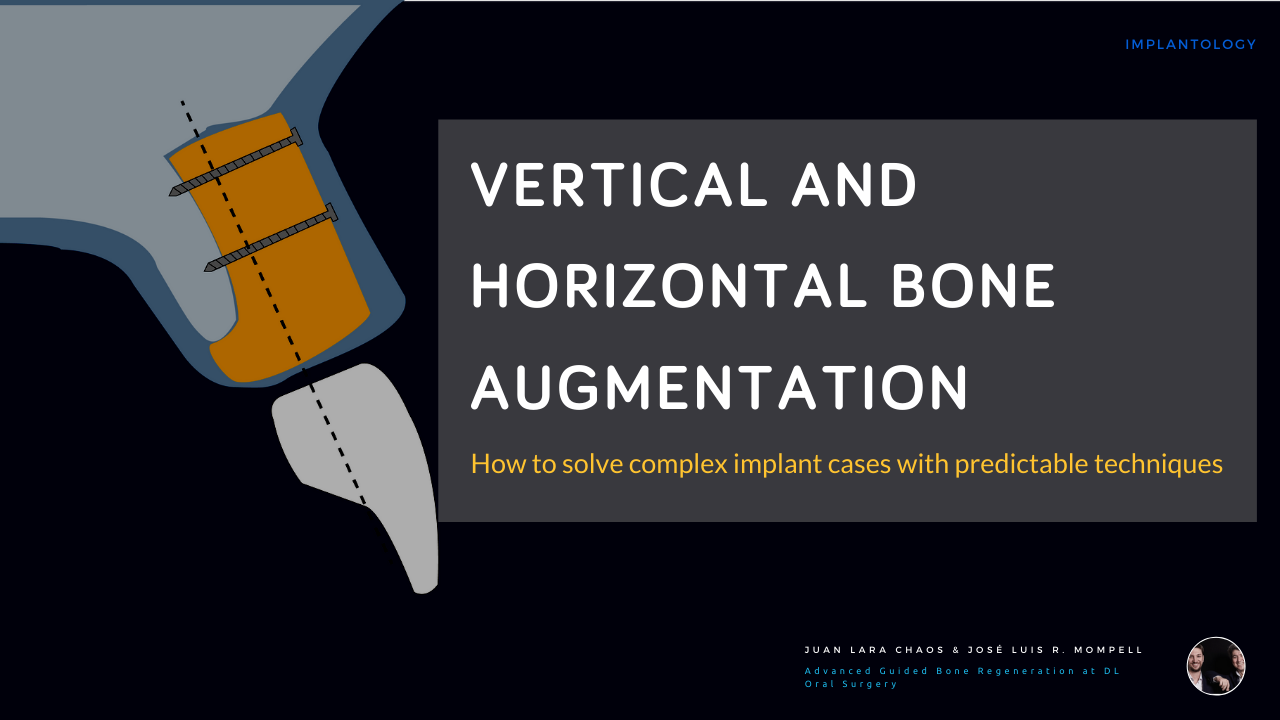 DL Oral Surgery is a group of professionals dedicated exclusively to reconstructive surgery and implantology that tries to meet the current demand for aesthetics and function with long-term predictability.

And we also love traveling!

Bone atrophies are one of the most challenging situations in modern implantology, and they affect many different patients in many different regions of the jaws.

This increasing ratio of implant complications and subsequently, bone loss, forces every single implant surgeon to be trained in Reconstructive Surgery.

But no matter the technique, the material, the access, or the patient characteristics, everything is base on controlling wound dehiscence, graft exposure, infection of the augmented site, and bone resorption as some of the main complications of the bone grafting procedures.

Our working philosophy is based on the sentence said by engineer Kelly Johnson in 1960, summarised in the acronym K.I.S.S. (Keep It Simple Stupid).

We never over-treat a patient or do something that is not indicated of scientifically proven.

We always try to be as minimally invasive as possible and try to reduce to the minimum the number of surgeries our patients go through.

But we also think that when implant loss may happen, the remaining bone might be too damaged to receive new implants.

It is at this very moment when we firmly believe that achieving a “Restitutio ad Integrum” is the best way to be able to place new implants and ensure long term stability of our treatments.

In the process of restoring the lost anatomy, due to implant loss or any other reason; traumatism, periodontal disease, dental cysts, infections, or any other, we conduct techniques based on:

3. Stability of the results in the long term.

One of the issues that we may have to face is an early infection of the grafted material. Despite the fact that we have been very careful about the asepsis of our procedure, this complication can occur within the first two weeks after the augmentation surgery.

That is why we strongly recommend you to do antibiotic prophylaxis and continue it for 7 to 10 days.

Another of the most significant problems that we might have to deal with is early exposure of the graft.

If our grafting material is exposed to the oral cavity, it will be contaminated by oral pathogens leading to infection, and partial or total loss of the reconstruction.

How can we deal with early bone grafting exposure?

We have to bear in mind that this kind of exposures is more likely to happen when using bone substitutes no matter the origin: allograft, xenograft, or alloplastic, instead of autogenous bone.

We also have to remember that autogenous bone is the only material that has every single characteristic of the ideal grafting material:

– And we also like to add a fourth one, no antigenicity. This means that no foreign body reactions or rejection reactions can happen when using autografts.

Due to all these reasons is why we mainly use pure autogenous bone in our augmentation procedures.

We strongly believe that autogenous bone still being the gold standard.

Apart from the grafting material that we use, the most significant amount of complications in reconstructive surgery arrive when we have wound dehiscence.

This is because most of the time, the approach used to access the atrophic area is a crestal incision.

This approach will facilitate the procedure but will lead to a hazardous situation: the suture will be placed over the grafted area once we have finished our reconstruction.

If any little dehisce may occur, the graft will be exposed, contaminated, and probably totally lost.

Is there a way of avoiding graft exposure?

Using a different approach to crestal incision like tunnel approach.

When accessing the area that has to be reconstructed through a subperiosteal tunnel, and performing the whole procedure through the tunnel approach will give us two significant advantages:

1. No incisions are made over the crest, so no suture will be there, reducing to zero the possibility of wound dehiscence

2. As far as no incisions are made over the periosteum that is covering the graft, its osteogenic and revascularization capacity remains intact.

Is there any other way?

When the atrophy is located on the maxilla, yes.

We can prevent our graft from exposure by doing a two-layer-closure. We can use a rotated palatal flap of connective tissue to act as a first layer and then suture the mucosa over it.

If wound dehiscence of the first mucosal layer may happen, we still having the chance that our rotated palatal flap; we have to keep in mind that it keeps its vascularization, will cover and prevent our graft from exposing to the oral cavity.

Advantages of the tunnelling and rotated flap technique

Aside from the previous described advantage of reducing the likelihood of graft exposure, there are other advantages that deserved to be described:

This is mainly obtained by two reasons; the first one has been explained in the previous paragraph. Autogenous bone is clearly superior to any other biomaterial.

At this point, we need to talk about the reconstructive model proposed by Prof. Khoury (Olsberg, Germany)

This model is based on imitating nature by using autogenous bone.

A bone block is harvested from the retromolar area and then split into two very thin bone blades. These blades will be used to restore the missing cortical walls.

Autogenous from chips, obtained with a safe-scrapper like this one, and a bone crusher, will be placed in the space created by those two thin bone blades.

The whole procedure is performed, if possible, through the already explained tunnel approach.

If you want to take a look at our Webinar about Bone Resorption and Bone Stability, check out in this link.

In 2015 we published in the I.J.O.M.S. our experience on the treatment of the posterior atrophic mandible. It is worth to read it!

Can we use this reconstructive model in all regions of the oral cavity?

Here you will be able to see how we manage bone atrophies in different areas of the oral cavity.

The longer and deeper the defect is, the more difficult the procedure is.

Is it Possible to combine different procedures at the same time?

This is also one of the biggest advantages of using autogenous bone and this reconstructive model. We are able to combine different procedures, such as:

– And last but not least, Soft Tissue Management. Dealing with peri-implant tissue is mandatory to achieve long term stability of our procedures and decreasing the risk of suffering from mucositis of peri-implantitis.

There are several techniques proposed to obtain better quality tissue surrounding our implants. We know by the literature that we need at least 2.5-3mm of keratinized mucosa to have a good biological width and good implant protection.

The classical technique created to restore the vestibule. We use it a lot of times when we have enough keratinized tissue, but we want to improve the attached mucosa. Posterior mandible or the anterior area when an overdenture is planned, are some of the regions where we indicate this procedure.

Both, Horizontal and Vertical Bone augmentations are two of the most challenging situations in modern implantology.

To achieve success in the treatment of these complex cases, it is mandatory the best knowledge about bone biology and biomaterials.

No matter which material we are using to reconstruct the atrophic area (As you will probably know by now, we are Autogenous Bone Lovers) wound dehiscence and subsequent exposure and loss of the graft are some of the nightmares that every reconstructive surgeon will have to deal with sooner or later.

Tunnel Approach, as long as there are no incisions over the crest, reduces this exposure ratio almost to zero, postponing that nightmare. A bit more challenging, for sure, but a good night’s sleep is worth the effort!

We don’t want to finish without mentioning soft tissue management. As one of the Fathers of modern implantology said: “Bone sets the tone, but tissue is the issue”.

We can’t agree more with that statement.

That’s why in every single case we treat, no matter if a reconstruction has been performed early before, soft tissue around implants is carefully examined.

We strongly believe that Keratinized mucosa around implants will be our “implant seatbelt” in case of future aggressions.