Bio-Oss® Collagen in the Buccal Gap after an Inmediate Implant

In this article, Araujo & Lindhe conclude that “the placement of Bio-Oss Collagen” in the buccal gap between the implant and the buccal-approximal bone walls of fresh extraction sockets, after an immediate implant, modified the process of hard tissue healing, provided additional amounts of hard tissue at the entrance of the previous socket and improved the level of marginal bone-to-implant contact.

This is quiet controversial, when some years ago, 2001, Paolantonio published that the gap between the implant and bone crest is less than 2 mm, any biomaterial is needed to fill the buccal gap.

The are some issues that I would like to highlight about this article:

– The premolar that they used for this experiment is the fourth premolar, and has we know from previous trial (Vignoletti 2009), this is the most favourable premolar and less prone to bone resorption that the third premolar.

– If we take into account the article from Januario (2011), we conclude that maybe this trial should be repeated again in the third premolar that maybe behaves in a more similar way than the fourth premolar.

– This improvement of the level of marginal bone-to-implant contact and amount of hard tissue doesn´t mean that the bundle bone has been preserved. The only way to preserve it, is preserving the teeth. 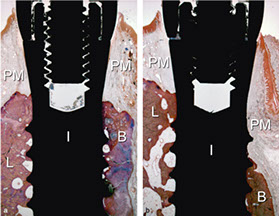 Although this sentences and doubts surrounding this trial, every time I go through an inmediate implant I prefer to graft the buccal gap with a biomaterial or autologous bone or even mix both with PRGF® to accelerate and to promote bone formation around the implant

More research in human trials, similar to that one published by Sanz in 2010, but this time using a biomaterial in the gap are needed to prove definitely whats the real difference between grafiting or not grafiting the buccal gap of an inmediate implant.