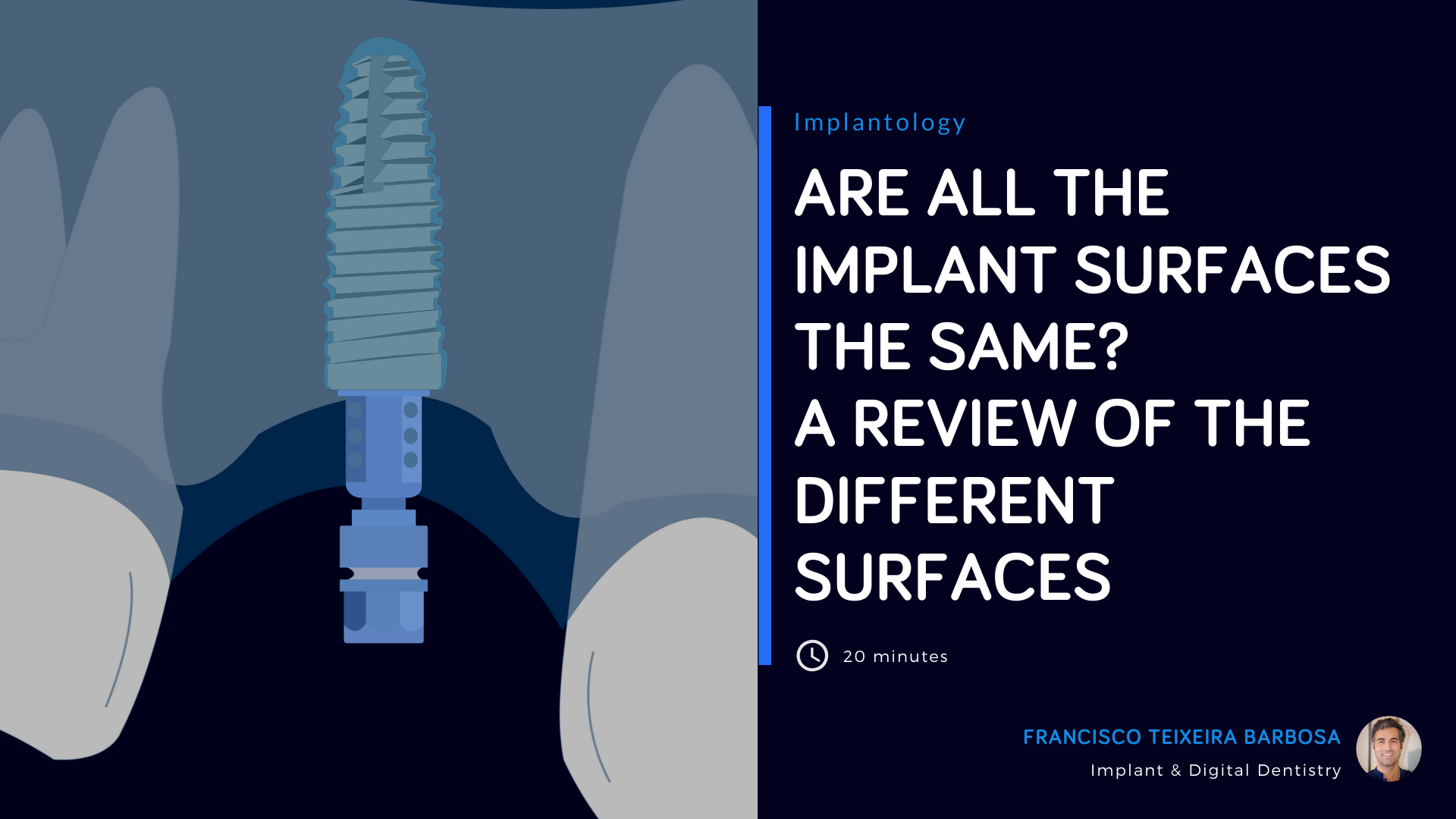 Are all the implant surfaces the same? a review of the different surfaces.

Every day, we are bombarded by thousands of ads in the form of banners, links, and emails, where companies try to make themselves heard amidst the noise of advertising and fierce propaganda typical of our consumerist society.

So much so, that in one day, we receive as many visual impacts as a man of the Middle Ages would have received in his lifetime. We have developed an anti-spam shell that makes life difficult for advertising and marketing companies.

In the end, it doesn’t matter if you use a Samsung Galaxy or an iPhone since we use devices for similar things: calling, messaging, social networking, mail, Tinder, and in the case of the Samsung, even as an explosive device.

In dentistry, the same thing happens to us; commercial houses try to differentiate themselves by advertising innovative products, improvements in their old portfolios, and even selling something they have not yet developed.

Fortunately, we have scientific publications, where despite bias, there still are – fortunately – independent and honest research publications that tell us which products we should consider in our daily clinical practice.

One of the “hot” topics in implantology is the topic of surfaces, where we often hear the famous mantra of “all surfaces are equal” or “the best surface is the mechanized one,” and lately, see publications about self-transplantation of the patient’s own teeth to replace an absence, delivering promising results.

In this field, the work of Ernest Lucas stands out with truly surprising results. I recommend you without hesitation to attend one of his lectures, which will surely not leave you indifferent.

But let’s get back to the issue of surfaces:

Are they really all the same?

What differences do the surfaces make from a clinical point of view?

What types of implant surfaces are there, and which ones should we use?

In this article, I will try to highlight some key points about the state of the art of implant surfaces currently on the market.

This classification divides the implants according to the roughness values of their topography. These measurements can be based on two parameters:

In this article, we will focus on the value Sa, which is more relevant than the value Ra.

According to the classification of Ann Wenneberg and Albrektsson (2004), the areas are divided into:

Depending on the Sa value, there is a different biological performance.

Of the most commonly used techniques to make changes to the surfaces of implants, two stand out:

The Sa value reached in this type of surfaces is around 1.5µm, placing it within the category of moderately rough surfaces (Wenneberg 1998).

On the other hand, clinical studies have not been able to prove this superiority of sandblasted implants (Karlsson 1998).

The difficulty of convincing patients to have an implant removed by counter-torque must be mentioned, hence the difficulty in comparisons at the clinical level.

In this video, we can see a sandblasting process:

In this group, we will find that greater roughness—or, in other words, greater Sa value—does not mean better biological interaction.

To prove this, a study by Cordiolli (2000) compared the torque of implant removal with different Sa:

– Mechanized surface with a Sa value of 0.29 µm

– Sandblasted surface with a Sa value of 1.26 µm

– TPS (additive technique) surfaces with a Sa value of 9.10 µm

The results suggest that, indeed, the implant that obtained the highest removal torque was the one with an acid-etched treated surface with only 0.62 µm Sa value.

There are many other studies with the same conclusion; a higher roughness does not imply a higher BIC (Bone Implant Contact).

If we go deeper into the clinical trials, there are other important points to highlight:

– There is a presence of periodontal pathogens, regardless of the surface of the implant (Shibli 2007).

– Implants with acid-etched treatment have a better osteointegration than mechanized implants, though clinically, it is difficult to prove due to the non-convenience of performing histologies of implants placed in patients, as well as the performance of the removal of implants by counter-torque to verify their resistance to counter-torque.

This type of surface is the most researched and used in implantology today.

We have all heard of the SLA surface (Sandblasted, Large-Grit, Acid-Etched), and we have all received in our dental office commercial consultants with a “novel” implant that has “exactly the same Straumann SLA surface,” and that SLA surface has been developed by a runaway Straumann engineer.

History is repeating itself over and over again as, on the level of scientific evidence, the Straumann surface has proven to be the one with the best long-term results (Derks 2014).

I have come to believe that at Straumann, they must have implemented some security measures, as in the Pentagon, to prevent their engineers from continuing to “run away” and end up developing the “same” surface in some other company.

That is why we should always ask the commercial advisor who presents the “new implant” what Sa value is there in such a disruptive implant.

If the answer is “I don’t know” or simply “We don’t have that data,” we should not use that implant on our patients since it does not have the requirements or the minimum research to be treated as a safe medical device.

The influence of the SLA surface on mesenchymal cells has also been investigated, and it has been found that this type of surface promotes the differentiation of stem cells.

This means that SLA surfaces are more osteoconductive compared to machined surfaces and, therefore, achieve greater integration between the bone and the implant. The result is a higher BIC value and higher implant removal torques (Davies 2003).

From a clinical point of view, the SLA surface provides significant advantages compared to other surfaces, including the reduction in the osseointegration time and the fact that it can be loaded after 6 to 8 weeks.

Reducing the integration time also reduces the risk that the implant may be subjected to micro-movements that could lead to the implant’s fibro-integration (Szmukler-Moncler 1998).

There are several surfaces on the market with official Sa values that we should know about (Rodriguez Rius 2005, Dohan Ehrenfest 2011).

Among the surfaces, the best known and scientifically proven is the Straumann® Sa surface with a Sa value of 1.83µm.

Hydrophilic surfaces. One of the best.

Among the SLA surfaces, hydrophilic surfaces deserve a special mention, and the most famous of these on the market is the SLActive® surface.

This surface improves the initial adhesion of the proteins necessary for the beginning of bone healing and the process of osseointegration (Schwarz 2007, 2008, Lang 2011).

The differentiating potential of this surface can be observed by measuring the ISQ with an Osstell®. Normally, an ISQ value (>70) suitable for early loading is observed from the third week after implant placement (Bornsteim 2010).

These surfaces have proven to be superior in cases of patients with some systemic disease, posterior maxilla where bone density is low and diabetic patients (Nicolau 2013, Nicolau 2016, Nelson 2016, Cabrera-Domínguez 2017).

By reducing the time of osseointegration, the “danger zone,” as named by Anne Wenneberg in her book “Implant Surfaces and their Biological and Clinical Impact”.

This reduction of the “danger zone” is especially useful in cases of immediate loading: the patient can subject the implant to micro-movements during this phase, causing it to fibro-integrate (Szmukler-Moncler 1998).

All implants contain a native oxide layer on their surface that can be induced by thermal treatment or by placing the implant in a galvanic cell to increase the native oxide surface.

It should be noted that in this study, the implants used had the same macro-geometry.

Although the word “oxidation” may seem unfriendly, especially for a device that is going to be implanted in human patients, it is widely used in different implant brands.

Among the surfaces resulting from additive techniques, the most famous are TPS surfaces.

TPS surfaces involve applying titanium particles to the surface of the implant using a plasma spray.

This process creates an extremely rough surface of 4 to 5 µm (Wenneberg 2009).

If higher surface roughness will mean higher biological interaction, then the TPS surface would undoubtedly be the gold standard of surfaces.

But it’s not, and it has been proven that:

– They have a higher failure rate, especially in patients with a history of periodontal disease and patients who smoke (De Boever 2009).

In the short term, they have been shown to be bioactive and promote osteogenesis.

They have been associated with the activity of multinuclear giant cells, whose activity in the vicinity of implants promotes bone resorption.

They are not recommended.

Once the various types of surfaces have been analyzed, we can conclude that:

– Almost all commercial houses have their implant systems with surfaces with an Sa value between 1 and 2 µm (moderately rough surfaces). A commercial company that has not conducted serious research on the surface characteristics of its system should be questioned on its reliability.

– Early loading should be validated and supported by scientific publications using each commercial implant system. The validity of a particular technique cannot be extrapolated just because the surface “is similar to ‘x’ surface.”

–  The macrogeometry of the implant can have a direct impact on the healing period. NOTE: It is important that we read the articles by Berglundh and Abrahamsson (2003, 2004) and see how a low “aggressive” macrogeometry promotes a limited post-surgical remodeling reaction.

I strongly recommend you read this amazing article from Nikos Mattheos; From Friction Stability to Osseointegration and all things in-between..!. The best article I found about the impact of torque and the macro geometry of an implant.

– Most of the available surfaces in the market manage to osseointegrate even if they don’t obtain correct primary stability (Rodrigo 2010).

– Some surfaces have shown to be more complicated in the treatment of periimplantitis, responding little to the treatment applied (Albouy 2011, Mellado-Valero 2013).

I hope you found this article useful. You can leave your comment below or email me at [email protected].